My family just went to South Haven, MI; it’s a cute, small town off Lake Michigan. This is

not the first time we have been here, it’s our third actually going as a family. Why go to South Haven? Well, there’s the beach, past posts have told you that I love the beach. There’s amazing ice cream over at Sherman’s, and our main reason for going, the race track.

Here’s a bit of information about my life growing up…my dad is a Chevy guy. I don’t know if it’s only a growing up in the country thing or if a lot of families are like this  but if your dad is a Chevy guy, you drive Chevy, if he likes Ford, you drive a Ford, or if he likes Dodge, you drive a Dodge. That’s just how it is. When Cherokee first came home with her husband Brian, he drove a Ford. And back then I just thought, “how could you bring someone home who drives a Ford?” Now lets skip to years later when I brought home Caspar, I am surprised my Dad didn’t have a heart attack then because Caspar drives an Import. On our first date he showed up in, his now race car, a 1999 Acura Integra. Y’all, when we first started dating I was driving a Chevy Silverado.

Back then, Caspar was slowly turning this car into his race car. I don’t remember what date number it was but he tried showing off his “skills” by going fast around the curves near my parents house, we ended up in a field shortly after. And yet, I was supportive when he went to go race his car the first time.

He likes to go up to Gingerman’s Raceway, in South Haven, if you ask anyone who has been there it’s a safe track. The reason why it’s safe is because there’s grass all around the track. Think about it though, would you rather go off and hit railing or go off into a field of grass? Yes, there is still a risk, this past weekend we watched a fellow driver flip his car while going around a curve.

After last years run he came home and instantly took apart his car. He gutted this thing. Anything he could do to make it lighter, he did. Once we decided we were going back again this year he spent every night for weeks out in the garage preparing this care. (I may have told him he could never say I wasn’t supportive.) We went to one of the Shelby Club events this year, for this you need to be part of the club which is easy to join. They have more than one event at Gingerman and they also travel outside of Michigan.

What I like about this event is that you don’t just see one type of car, you see all sorts from Mustang’s, Corvette’s, Mazda’s and yes, the Integra’s. There’s different groups for different experience of drivers, usually this first couple groups are the more experienced and the last few are newer drivers or members. I loved that this year they had a group that involved instructors. And trust me, this is a family event! We camp at the track when we go and the kids love it. There’s enough room for them to run around, and as I mentioned earlier there’s a delicious ice cream shop, the beach and this year we decided to add an apple orchard to our list of things to do.

Caspar’s fastest time this year was 1:59 and I am truly proud of him. 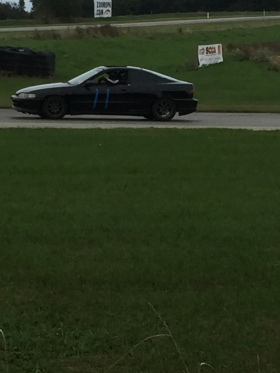 Let me know if you our interested in seeing any of our videos from our time on the track, I’ll gladly post them!

We tried a water craft today that didn’t really work but the kids had fun anyway. I filled a small cup with water, mixed in green food coloring and dish soap. I then had the kids blow bubbles then placed the paper over the bubbles. No color went onto the paper so as a craft it failed but I’m counting it as a science activity. Right now the kids are trying to see who can blow the most bubbles. #craftytuesday #failedcrafts #bubblefun #stpatricksday #waterfun #indooractivitiesforkids #messy
This is one of my daughters baby dolls, she used to carry it around everywhere and it would always creep people out because it only has one eye. She even brought it into our Christmas cards years ago. Well today I pulled the baby out of the closet, (it’s been sitting there waiting to be fixed for a while) I cleaned it up and made it an eyepatch. It’s not so scary anymore. . . . #cleaningbabydolls #babydolls #scarydolls #dollaccessories #kidstoys #favoritetoy
My mom is remodeling her house and turning it into goals. I’m a tad jealous because I have been wanting to work on my house, I created a whole list of things I wanted to do. Finished pictures soon to come! #castironskillet #castironcooking #castirondisplay #homeremodeling #diy
In my state (MI) we have a bottle deposit, 10 cents. Every time we return cans, my 6 year old gets his own bag or two of cans. He knows that however many cans he gets that each can is worth 10 cents, and 10 cans is a dollar. Today he had 94, doing that math he figured out that he had $9.40. With that money he earned, he had enough to buy himself and his brother match box airplanes at $2 each and how much money he would have left over. . . So, in summary today my son had a life lesson of "earning money" shopping and being able to afford something he wanted, as well as recycling and math. Plus the airplanes he picked out will be useful in future science lessons. ;) . . I know that there are more states without bottle deposits, for those that do not offer the incentive, it would be easy to set up something similar in your home with dirty dishes, recycling boxes, etc. :) . . #homeschool #homeschooling #homeschoolmom #homeschoolersofinstagram #matchbox #matchboxairplanes #educational #recycling #bottledeposit #earning #math #homeschooleducation #homeschooladventures #teachingkids #lifelessons #futurepilot #homeschoollife #kidledlearning
What does your little one currently have you reading on repeat? We have been reading “Barney is So Big” everyday, multiple times a day. He hasn’t even seen a Barney episode but he is hooked on this book. . . #barney #barneythedinosaur #reading #amreading #readingwednesday #books #childrensbooks #morningstories #storytime #bookstagram
I wanted to try this activity I seen online one day, each day they had a new heart for their kids and the heart said something positive about the child and they did this everyday up to Valentines Day, in February. I thought it was a great idea and wanted to do it with my family, I love that I tried it and think it’s a great confidence boost. My fiancé really loved reading his hearts when he had a bad day last week. Since I have done this my daughter went around a wrote notes to everyone, including the pets, about how much she loves them. . . . #positivevibes #postivethoughts #confidence #confidenceboost #valentines #valentinesday #notes #goodreminders #hearts