I am pale, well, I think I am so, my friends who are paler than me don’t think so but I have fairly light skin. So is my daughter, she likes to comment how her dad isn’t; she has mentioned once, actually more than once, how I’m white, she’s white, her brother is white, and Daddy is brown.

If you read our about me you will have seen that I said I am not married. I’m not. My boyfriend Caspar and I have been together for five years.

Have you caught on yet? 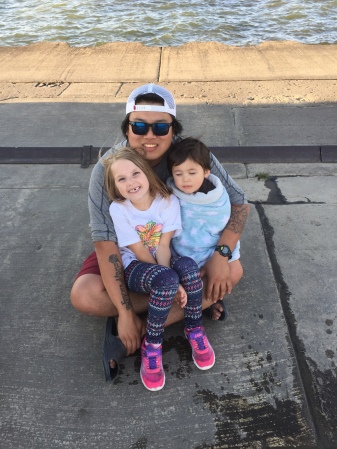 This is was on our last trip to South Haven, MI back in September. As you can see Caspar has more color to his skin than the kids, he does look lighter than usual in these pictures but I never thought about how much darker he really is until my daughter started to talk about it more and more.

I’m not worried that this bothers my daughter, at least yet, I dread the day it comes. I feel that she’s making an observation until she understands that Daddy is from Taiwan so he looks a bit different from us. And when I say I dread the day this comes, it’s because of how other people still act towards our family.

One incident, I wasn’t there for, an older women refused to leave the two of them alone because she didn’t believe he was her dad. People stare at us and people have asked if he was her real dad. It’s bound to happen, something I have almost gotten used to. I sometimes want to ask people if they think I should have continued my family with a white man, it’s silly I know. I don’t mind people asking about our family, as long as they’re nice about it.

He is the only dad she has ever known.

And people have shamed me for this.

It’s one thing I am still working on in counseling because I’m still angry about it. I’ll admit it; I’m angry because I still can’t believe it and I’m worried how she will handle it when she’s older. I have thought about it many times, what am I going to say to her? How will she react? What will people say to her because it’s so obvious that her Daddy isn’t her biological father? Will this change her and Caspar’s relationship?

People say it’s my fault, I chose to have her. I thought about myself and not him. I’ve heard this said about other mother’s too. Because it is only our fault, according to society. I guess that’s really where most of my anger towards this is, I’m not going to fight for him to be in her life. I’m not. I’ve seen friends do that and it’s left their kids with empty promises from their biological fathers, I even watched friends go through that with their own fathers. But yet, it’s always the mother’s fault. Why? I don’t know.

With my situation, I’m not trying to blame him. He doesn’t want her, that’s that. I’m working on it and I know Caspar and I will be there for her when our daughter is trying to work through it. I honestly hope she grows up to not care and continues to accept that her daddy looks different than her. If only it were that easy.

We tried a water craft today that didn’t really work but the kids had fun anyway. I filled a small cup with water, mixed in green food coloring and dish soap. I then had the kids blow bubbles then placed the paper over the bubbles. No color went onto the paper so as a craft it failed but I’m counting it as a science activity. Right now the kids are trying to see who can blow the most bubbles. #craftytuesday #failedcrafts #bubblefun #stpatricksday #waterfun #indooractivitiesforkids #messy
This is one of my daughters baby dolls, she used to carry it around everywhere and it would always creep people out because it only has one eye. She even brought it into our Christmas cards years ago. Well today I pulled the baby out of the closet, (it’s been sitting there waiting to be fixed for a while) I cleaned it up and made it an eyepatch. It’s not so scary anymore. . . . #cleaningbabydolls #babydolls #scarydolls #dollaccessories #kidstoys #favoritetoy
My mom is remodeling her house and turning it into goals. I’m a tad jealous because I have been wanting to work on my house, I created a whole list of things I wanted to do. Finished pictures soon to come! #castironskillet #castironcooking #castirondisplay #homeremodeling #diy
In my state (MI) we have a bottle deposit, 10 cents. Every time we return cans, my 6 year old gets his own bag or two of cans. He knows that however many cans he gets that each can is worth 10 cents, and 10 cans is a dollar. Today he had 94, doing that math he figured out that he had $9.40. With that money he earned, he had enough to buy himself and his brother match box airplanes at $2 each and how much money he would have left over. . . So, in summary today my son had a life lesson of "earning money" shopping and being able to afford something he wanted, as well as recycling and math. Plus the airplanes he picked out will be useful in future science lessons. ;) . . I know that there are more states without bottle deposits, for those that do not offer the incentive, it would be easy to set up something similar in your home with dirty dishes, recycling boxes, etc. :) . . #homeschool #homeschooling #homeschoolmom #homeschoolersofinstagram #matchbox #matchboxairplanes #educational #recycling #bottledeposit #earning #math #homeschooleducation #homeschooladventures #teachingkids #lifelessons #futurepilot #homeschoollife #kidledlearning
What does your little one currently have you reading on repeat? We have been reading “Barney is So Big” everyday, multiple times a day. He hasn’t even seen a Barney episode but he is hooked on this book. . . #barney #barneythedinosaur #reading #amreading #readingwednesday #books #childrensbooks #morningstories #storytime #bookstagram
I wanted to try this activity I seen online one day, each day they had a new heart for their kids and the heart said something positive about the child and they did this everyday up to Valentines Day, in February. I thought it was a great idea and wanted to do it with my family, I love that I tried it and think it’s a great confidence boost. My fiancé really loved reading his hearts when he had a bad day last week. Since I have done this my daughter went around a wrote notes to everyone, including the pets, about how much she loves them. . . . #positivevibes #postivethoughts #confidence #confidenceboost #valentines #valentinesday #notes #goodreminders #hearts